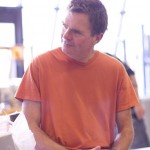 Michael Davey is a sculptor and installation artist who employs photography, drawing and video and whose work often includes cast materials and found objects.  His interests in landscape, industrial technology and the built environment find their way into his pieces which have been shown and collected throughout Canada, the U.S. and overseas.  His most recent initiative is the establishment of M9 Contemporary Art  Centre on the Bruce Peninsula, Ontario  where he exhibits along with guest artists on an annual basis.

An art historian, curator, cultural policy specialist and academic administrator, Joyce Zemans served as dean of the Faculty of Fine Arts (1985-88), acting director of the Graduate Program in Art History (1994-95) and chair of the Department of Visual Arts Department (1975-81) at York University.

She also held the Robarts Chair in Canadian Studies (1995-96) and was acting director of the MBA Program in Non-Profit Management and Leadership (2000-01). She currently directs the MBA Program in Arts and Media Administration in the Schulich School of Business at York.

Professor Zemans served as director of the Canada Council for the Arts from 1988 to 1992. She holds honorary doctorates from the University of Waterloo and the Nova Scotia of Art and Design and is an Honorary Fellow of the Ontario College of Art and Design.

Joyce Zemans was appointed a member of the Order of Canada in 2002 in recognition of her contributions to Canadian arts and culture. In 2010, she was chosen to receive The Canadian Conference of the Arts’ Diplôme d’honneur for sustained contribution to the cultural life of the country.

Professor Zemans currently serves on the board of the Institute for Studies in Canadian Art at Concordia University and of the Advisory Boards of the Toronto Arts Council, the Creative Trust, the Magnetic North Theatre Festival and the Asia Pacific Journal of Arts and Cultural Management.

Tim Whiten has exhibited his work in major exhibitions of drawing and sculpture throughout North America and Asia. He is represented in numerous private, corporate and public collections, including Canada’s National Gallery and the Art Gallery of Ontario.

A former student of noted psychologist and philosopher Oscar Oppenheimer, Professor Whiten, in his artistic activity and personal study, reflects the ecumenical interests demonstrated by his mentor. His concern for man’s place in the scheme of things has provided motivation for his investigations of the traditional ideas of man as expressed in culture.

Professor Whiten was the recipient of the 1999/2000 Faculty of Fine Arts Dean’s Teaching Award.

A professional photographer whose work has been exhibited in more than 300 solo and group shows, Professor Semak received his technical training in photography with Canadian Kodak. His photographs have garnered many awards in Canada, the U.S. and Europe, including the Gold Medal for a solo exhibition and book on Ghana produced by the National Film Board of Canada, two Awards for Excellence in Photo Journalism given by Pravda, and an Excellence F.I.A.P. (Switzerland) Diploma.

Michael Semak’s photographs are found in many private and public collections, among them the National Film Board and the National Gallery of Canada, George Eastman House, the Museum of Modern Art in New York, and the Public Archives of Canada.

Richard Perry is an authority on the art history of India, China and Japan from early to modern times, with special emphasis on the religions informing these art traditions. For some three decades, he has also published reviews of classical music concerts and recordings for numerous North American journals.