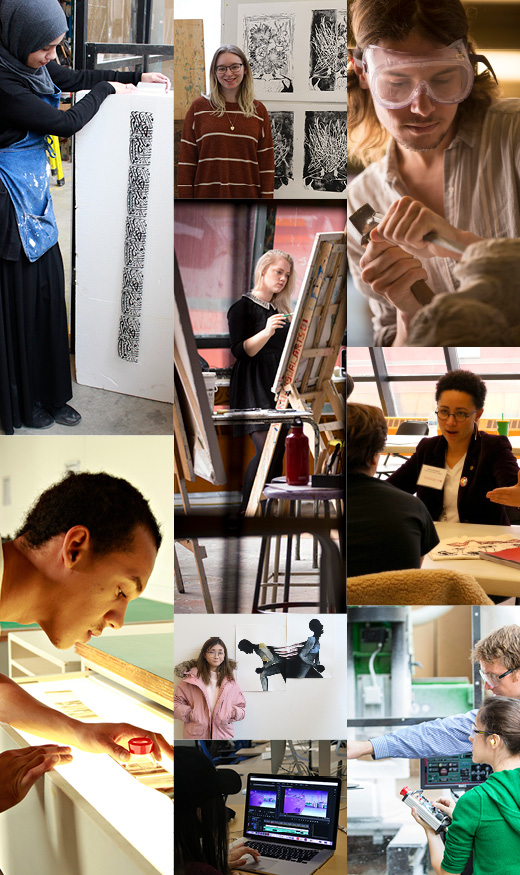 With its unique interdisciplinary approach that bridges studio production, art history and curatorial practice, AMPD’s Department of Visual Art & Art History offers students the opportunity to become well-rounded professionals in the field, able to lead in the creation, exhibition, critical understanding and communication of visual culture in diverse environments. Bridging art creation, art history and curatorial practice, VAAH provides a unique interdisciplinary approach and the most acclaimed facilities in Canada.

Lionel Rubinoff and William Kilbourn begin to bring art exhibitions to the campus, starting with Alan Jarvis’ A Decade of Art. Subsequent exhibitions follow, supervised by the Art Committee of the Board of Governors.
With the development of the Keele Campus, the Stong House becomes an art studio used by painter Ronald Bloore and many others.
The Department of Visual Arts is officially created and Ronald Bloore is appointed founding faculty member, under founding Dean Jules Heller in the newly established Faculty of Fine Arts.
Department of Visual Arts enrols its first class.
Rex Lingwood was one of the first students in the Fine Arts at York. He transferred from Psychology to Visual Arts, with a minor in Theatre Design.
The second Fine Arts building (the first benign Burton Auditorium in 1965), now known as the Joan and Martin Goldfarb Centre for Fine Arts (CFA), designed by Raymond Moriyama, opens.
The Graduate Program in Visual Arts is established.
Samuel Sarick establishes the Samuel Sarick Purchase Award in the graduate program in Visual Arts at York University. It is awarded to, on average, one student every year and their work is displayed throughout the Joan and Martin Goldfarb Centre for the Fine Arts.
The Art Gallery of York University is founded.
The Gales Gallery is dedicated, named in honour of donors Joy and Barry Gales.

VASA’s goal is to enrich the visual arts and art history community in AMPD and across campus. This is achieved by various programs and services that members of the council organize and run themselves, including campus art tours, art workshops, life drawing sessions, and student art exhibits.

Bringing AMPD to you