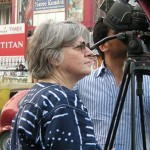 Professor Nicol is an award-winning documentary filmmaker whose work is grounded in the tradition of the artist as activist, probing issues of human rights, social justice and struggles for social change. Nicol’s research, writing and creative projects include video art and documentary as well as critical writing in LGBT human rights and social movements in Canada and internationally. She has created more than 33 feature films and presented her works widely in national and international festivals, conferences and community-based organizations.

Nicol is the Principle Investigator of Envisioning Global LGBT Human Rights, a partnership of mutual learning that brings together 31 international and community-based partners in Canada, India, Uganda, Kenya, Botswana, Belize, Jamaica, St. Lucia and Guyana. The project combines participatory documentary and participatory action research with qualitative interviewing, focus groups, and legal data research and analysis, to make a unique contribution to documenting and analyzing criminalization, resistance to criminalization and asylum within and beyond regions. Envisioning Global LGBT Human Rights is funded by a Community-University Research Alliances (CURA) award from the Social Sciences & Humanities Research Council of Canada (SSHRC) ($1,000,000, 2011-2016).

The goals of the project are to research and document the impact of laws that criminalize people on the grounds of sexual orientation and gender identity; the ways in which LGBT and human rights groups are organizing to resist criminalization and to advance LGBT rights; and flight from persecution and LGBT refugee issues in Canada – including implications for human rights policy formation, social services, and immigration and refugee policies.

As part of the Envisioning work, Nicol developed participatory video projects with partners based in the Caribbean, India and Africa. Recent outcomes include: And Still We Rise, (70 min., 2015), a moving documentary on resistance to the Anti-Homosexual Act (AHA) in Uganda; co-directed by Nancy Nicol and Richard Lusimbo, Sexual Minorities Uganda and Envisioning. No Easy Walk To Freedom (91 min., 2014) documents the growth of queer organizing and the struggle to decriminalize same sex sex in India. Directed by Nicol, in partnership with Naz Foundation India Trust in Delhi, and Naz Foundation International in Lucknow and Envisioning. The Time Has Come (31 min. 2013) features LGBT human rights defenders from around the world in the context of UN regional seminars to strategize on ways to strengthen protections under the historic United Nations resolution that recognized sexual orientation and gender identity as prohibited grounds for discrimination in 2011, produced by Vance, Fisher (ARC International) and Nicol (Envisoning Global LGBT Human Rights) and filmed by Envisioning videographers from Africa and the Caribbean, the documentary.

A large number of video shorts have been produced through Envisioning participatory video projects, many of which were included in an exhibition Imaging Home: Migration, Resistance, Contradiction, at the Canadian Lesbian and Gay Archives during World Pride Toronto – June 24 to October 22, 2014, and which are available on the Telling Our Stories pages of the Envisioning website. Other participatory video shorts are available on the Our Work pages of the Envisioning website.

In 2014 Nicol was nominated by York University for a Trudeau Fellowship and in May 2011, Professor Nicol was honoured for her contributions to research and documentaries on LGBT movements histories, and inducted into the National Portrait Collection of the Canadian Lesbian and Gay Archives.

In 2009, Professor Nicol completed her award-winning series From Criminality to Equality on the history of lesbian and gay rights organizing in Canada from 1969 to 2009 (Elle Flanders Award for Best Documentary, Inside Out, Toronto, 2007 and 2006; Best Documentary, Image + Nation, Montreal, 2006; Audience Choice Award, Making Scenes, Ottawa, 2002; John Bailey Completion Award, Inside Out, 2002). The series includes the films Stand Together (124 min. 2002), The Queer Nineties (90 min. 2009), Politics of the Heart (68 min. 2005) and The End of Second Class (90 min. 2006). This body of work was supported by a research/creation grant of $198,464 awarded by the Social Sciences and Humanities Research Council (2003-07) as well as grants from the Canada Council for the Arts ($60,000) and Ontario Arts Council ($20,000) in 2007.  Other films include: Dykes Planning Tykes (61 min., 2011) which provides a look into the groundbreaking family planning course for lesbians and queer identified women; and One Summer in New Paltz a Cautionary Tale (2008) on the struggle for same sex marriage in the USA.